Physician Associate Jessica Plail is hoping to set a new world record when she takes part in one of the toughest rowing races in the world next year.

Jess, who works in the trauma and Orthopaedic Department at Tunbridge Wells Hospital, is one of four NHS workers which make up a female team of six called All Systems Row. The race, organised by GB Row Challenge, will see the team row unassisted over 2,000 miles around Great Britain when they set off on Saturday 4 June 2022. As if that wasn’t tough enough, they’ve also set themselves an ambitious target of beating the current record held by an all-female crew.

She said: “To date, only six crews, including one female crew of four called the Segals, have completed this race. The ladies’ Guinness World Record for the fastest row around the British mainland, which was set in August 2010 by the Seagals, stands at 51 days, 16 hours and 42 minutes! We hope to challenge this time and in doing so gain a new world record.”

The race will see them start at London Tower Bridge, row down the River Thames in London towards the sea where they will then row in a clockwise direction around Great Britain before making their way back up the Thames to their starting point.

“This is an unassisted race meaning from start to finish we will be self-sufficient and cannot stop or take on provisions,” added the 33 year old from Tunbridge Wells.

“Our boat is 10 meters long with two small cabins at each end. During our journey we will be reliant on solar energy for powering our navigation systems, water maker and electrical items.

“As we’re are all passionate about environmental causes we’ll be using the challenge as a way to raise money for a small, Brighton based charity called Renewable World which is striving to make renewable energy accessible to all, helping to end extreme poverty and reduce climate change.” 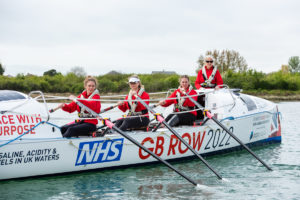 Between them the team spans four decades in age. Steph Toogood, who lives in Bexhill and works privately as a brain injury physiotherapist, is the eldest at the age of 51 while Charlie Cooper, a physiotherapist at Solent NHS Trust, is the youngest at the age of 21.  Lia Evans, 22, from Bexhill, who works as a physiotherapist at the Conquest Hospital in East Sussex, Andrea Harwood, 45, a social worker from Bexhill, and Sophie Harris, 35, an elective amputee who works as an intern sports therapist at Plymouth Albion Rugby Football Club, make up the rest of the team.

Rowing over 2,000 miles unassisted and against changeable winds and fast turning tides, requires much more than just strength, stamina and endurance though. To be able to successfully circumnavigate Great Britain teams need to understand navigation and the sea’s tidal flow, which is why it’s acknowledged to be the toughest rowing race in the world. That’s why Jess and the rest of her team will be taking a number of courses over the coming months to learn how to safely navigate their way around GB.

She said: “We’re all coastal rowers with varying degrees of experience ranging from two years to 10 years. However, Andrea is new to rowing so we’re currently teaching her – luckily she has a year to perfect her technique.

“In order to race safely we will be doing a lot of training leading up to the race. This will consist of long endurance training as well as cross training and strength work. We are looking to get coaching and training programmes developed for us and Plymouth University have offered to do some physiological testing for us to help set our training parameters which we will need to balance with nutritional support. We’ve even got an executive leadership coach to help with team building. Although I already knew Steph, Lia and Charlie we only met the other two crew members six months ago after we were put in touch with Sophie via GB Row Challenge crew finder and Steph found Andrea through Bexhill sailing club!”

The team are currently in the process of setting up a website so people can find out more about them, their training, the race, and the charity they’re supporting. They also plan on documenting their journey by taking photos and video footage of themselves along the way.

For more information about the race visit www.gbrowchallenge.com/